The goal was to communicate added value to subscribers and increase e-Edition usage through monthly email communications as well as an onsite ad unit.

Beginning in January 2021, the Gannett Retention team partnered with Studio Gannett and Tecnavia to add one or two glossy magazines or tabs as bonus content to every local market and USA TODAY's e-Editions. The magazines and tabs vary in titles such as A Year in Defense, MLB Preview, GO Escape, National Parks, America Renewed, Hispanic Living, and more for a total of 17 magazines throughout 2021 – all valued on stands at $5 each for an approximate value add of $85. The goal was to communicate this added value to subscribers and increase e-Edition usage through monthly email communications as well as an onsite ad unit.

The emails deployed to active subscribers were some of the top performing engagement emails from 2021. Average Open Rates were 35-47% with click-through-rates averaging 5-9% contributing to a 6pp lift in e-Edition users and over 12M pageviews, averaging 121 pageviews per user, with an average session duration of 10 minutes, and 5 sessions per user (via Exact Target and Google Analytics). Additionally, these emails deploy on Saturdays contributing to a noticeable lift in e-Edition usage over the weekend, traditionally lower engagement days for e-Edition. This project has been such a success that we decided to add all of the Studio Gannett titles in 2022. 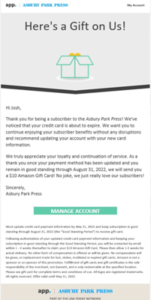 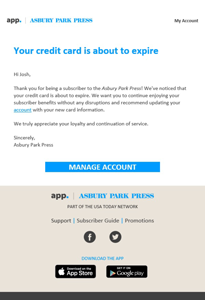 To engage readers by sharing upcoming content, by cross-functionally with the newsroom to develop a content focused subscriber engagement strategy.

Average open rate is 40% (comparable to the daily eEdition email). Numerous subscribers reached out with positive feedback regarding the Weekend Preview.

Future plans: This campaign has sparked more content focused subscriber engagement strategies, like a top 5 articles from the previous weekend email we are currently developing. 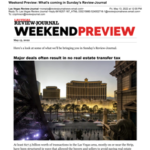 Retain subscribers that are being price increased.

We revised our price increase letter to include color and a visual representation of what happens when you pay your subscription. We wanted to show subscribers how they are an integral part of our newsrooms and local news. 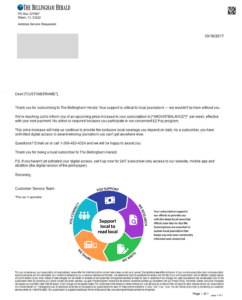 To quickly engage with plus subscribers, who, within the past week, called in to stop their subscription and to have them reconsider, with a combination bargain rate and a complimentary $10 gift card.

Data is gathered and emails are sent daily as customers call to stop their 6-day, Wednesday-Sunday or Sunday-only subscription. The customer clicks through the email, fills out a short form, and is rewarded with a renewed value subscription and a $10 gift card to the retailer or restaurant of their choice.

The program started in late March 2022 in six markets with 214 emails sent each day. It has since increased to 625 emails daily across all 28 markets.

During a 60-day period, this has resulted in 107 stop-saves across all markets (25 in Charlotte), as the program continues to gain momentum each day 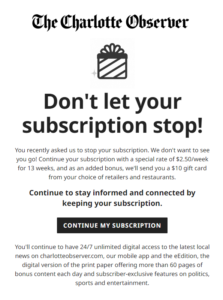 The Spokesman-Review brainstormed premium digital content that would appease to traditional readers as well as new readers.

The Chronicle was a beloved piece of Spokane history, so what if The Spokesman went out with the new and in with the old? The Spokesman hypothesized that print subscribers would happily activate their digital account to read the Spokane Daily Chronicle revived a subscriber-only e-edition. The Chronicle would include access to breaking news before the next day’s paper, features of archived Chronicle frontpages published that day and exclusive regional and national content. 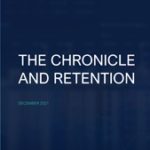 Your membership goes to support this nonprofit organization committed to continuing education and sharing of ideas. Members get preferred rates at events, the opportunity to network, learn revenue-generating strategies, and stay in the forefront of ongoing digital engagement. The Board of Directors look forward to your participation and support in advancing our audience development program.

Stay in the know with
news and offerings